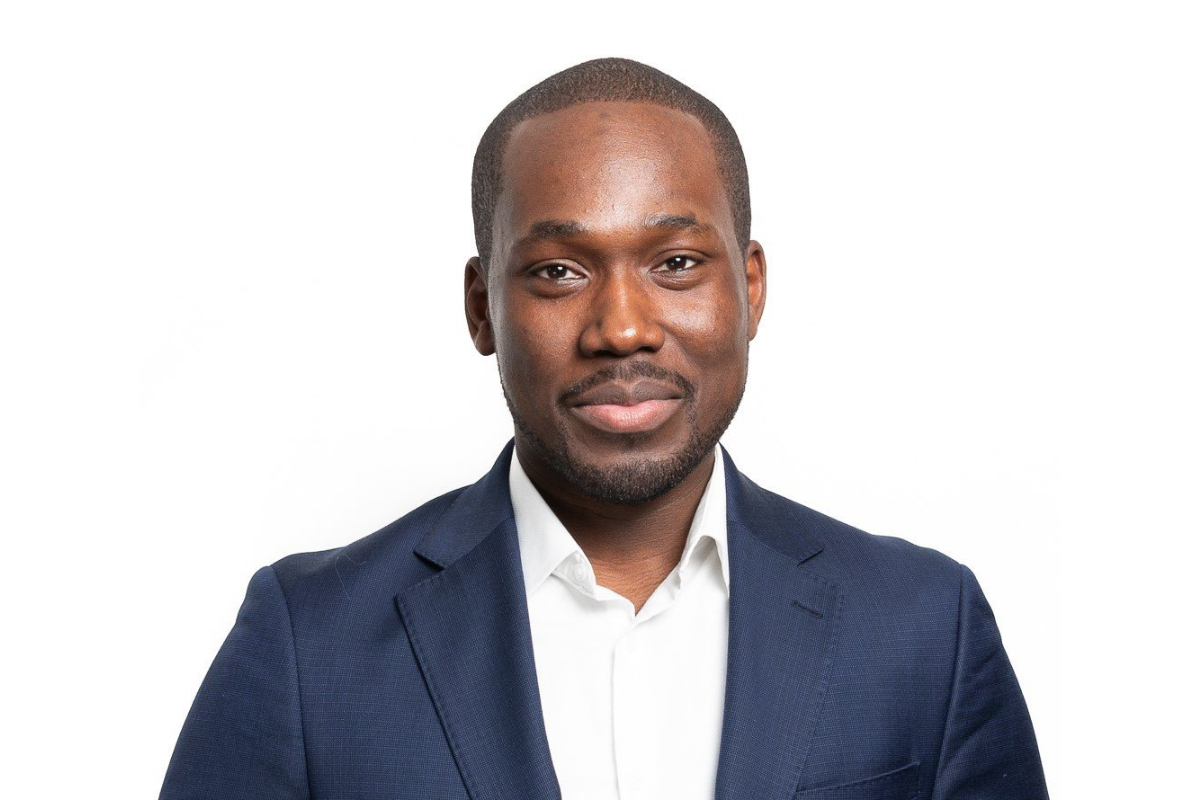 Rodney Appiah on Investing in Tech For Good

There’s been much talk of the diversity (or lack thereof) of the profile of founders that receive venture capital funding. But backing diverse founders is not only morally but also commercially sound. Someone who has not only seen this opportunity but is leading from the front is Rodney Appiah. Four years ago and with a decade of VC experience under his belt Rodney co-founded Cornerstone Partners - the first angel syndicate in the UK focused on investing in businesses led by black and diverse founders.

Cornerstone believes that superior returns can be achieved by leveraging the inherent and acquired competitive advantage of traditionally overlooked founders. With 15 years experience in financial services, Rodney knows a thing or two about investment opportunities. Beginning his career at Merrill Lynch, Rodney closed more than 15 transactions in five years ranging from £50m to £1.2 billion in size.

He then went on to become a senior investor at the Business Growth Fund followed by a stint as Director at Foresight Group. Now, alongside his current role as Chairman at Cornerstone, Rodney is also Chairman of the Confederation of British Industry London Under 35 committee, a Non Executive Director for impact investing platform Conduit Connect, and holds committee roles at the Lloyds Banking Group Black Business Advisory group and London Chamber of Commerce Black Business Association.

It’s fair to say his bio is impressive enough to make most of us feel like underachievers. So we were thrilled to have him join us at a panel event earlier this year on angel investing in tech for good. In that conversation he shared his thoughts on looking at impact investing through a fresh lens, capturing overlooked markets, and the use of tech to democratise investing. Here we have gathered those insights.

How do you define impact investing?

At Cornerstone we very much see impact going hand in glove with commercial returns. Our specific focus with regards to impact is around diversity. We fundamentally believe that diversity can bring a competitive advantage to high growth businesses. I'm also a Non-Executive Director for Conduit Connect where they think about impact by asking three key questions: i) is the impact measurable? ii) is the company committed to sustainable development practises? and iii) is impact core to the mission and ethos of the business? They also adopt a scorecard approach which they developed in conjunction with Deloitte that looks at nine various elements of how you measure and capture impacts. It covers both pre-screening as you assess the opportunity but also post-investment as you continue to measure that impact during the life of the investment.

How have you seen this way of investing evolve?

What's really exciting is that we’re seeing impact starting to pervade every aspect of society and embed itself within angel and venture capital investing. Whereas in the past impact investing was seen as quite separate, almost siloed, today everyone's looking at it in a much more contextual way and applying a more nuanced lens on it. I think it's a really exciting time.

One example of the growth of this way of investing is the acceleration of venture capital and investment firms wanting to become B corps.

I think impact has gone beyond being niche or nice to have. It's something that should be part and parcel of how we assess opportunities.

Why do you think that is?

I think there's a much better understanding of the seismic issues that are facing the world and an acknowledgement that businesses are really well placed to provide some of the solutions to those challenges. Take climate change - at Cornerstone we have a great relationship with angel groups tackling this issue head on. For example, Green Angel Syndicate who look to invest in businesses seeking to provide a more sustainable future particularly in the areas of green tech and cleantech. And the opportunity is significant given the amount of capital that's being shifted towards climate change. I also think investing needs to innovate and evolve to capture some of the emerging opportunities that were previously ignored. At Cornerstone partners we strongly believe that by focusing on diverse founding teams you can deliver outsized returns by capturing markets that have been historically overlooked.

What trends do you see emerging in tech for good?

One of the areas I’m really excited about at the moment is the move towards increasing democratisation of alternative investing. I think we're just at the beginning of that trend and the emergence of assets underpinned by technology such as cryptocurrencies and NFTs is an example of that. There’s also increased excitement around angel investing and a need for platforms and marketplaces to share knowledge, pool capital and invest together. I think this is the new vanguard in terms of FinTech more generally and I’m interested to see how this develops in the coming months and years. Cornerstone was birthed from an idea of wanting to pool capital to solve a collective problem and we are clearly not alone in identifying a need to disrupt the traditional investing model.The other really interesting trend for me is FemTech. It’s a fairly underserved market, although encouragingly, that is beginning to change given the increased attention on the lack of female founder-led funding in recent years.

The gender health gap represents a significant commercial and impact opportunity for the investment industry to engage and we are watching the space with interest.

The final thing that we’ve always been fascinated by at Cornerstone is media. I think particularly given the polarisation of media discourse increasingly becoming a question of extremes and a blurry fog of half truths and fake news. Trying to return to some semblance of balance in all discourse and the role technology plays in that is something we’re really interested in. 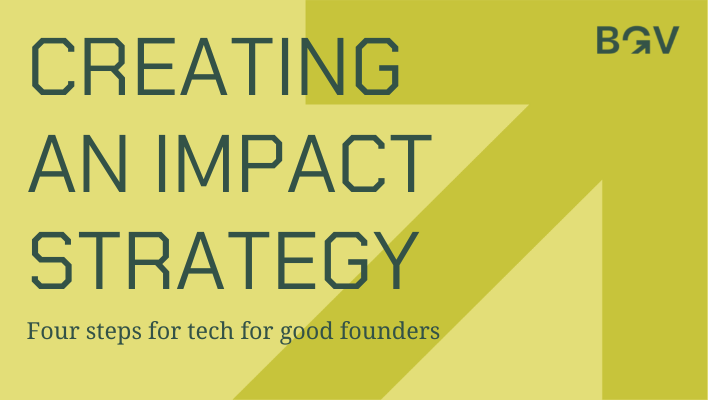 How to create an impact strategy: four steps for tech for good founders

As tech for good ventures launch and grow, investors want to see how good intentions become meaningful outcomes. So, as a founder, how do you create an impact strategy? Here we share four steps to do just that. 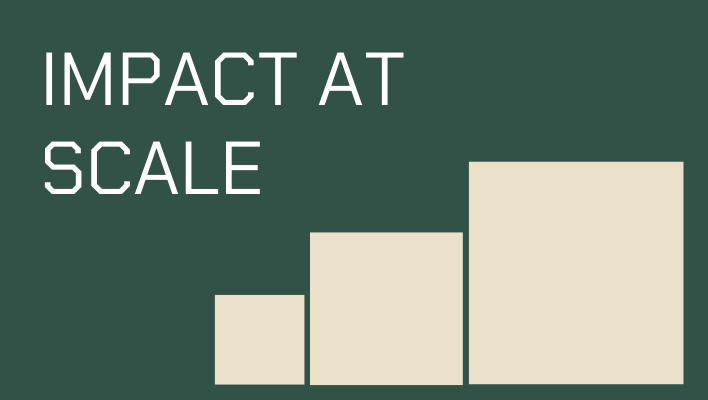 Impact at scale: are tech for good ventures at risk of mission-drift?

In a maturing tech for good ecosystem the question of impact validation is becoming increasingly important. We believe that as companies mature, so too should their impact practices. Here we share an analysis of BGV's portfolio that sheds light on whether that's the case. 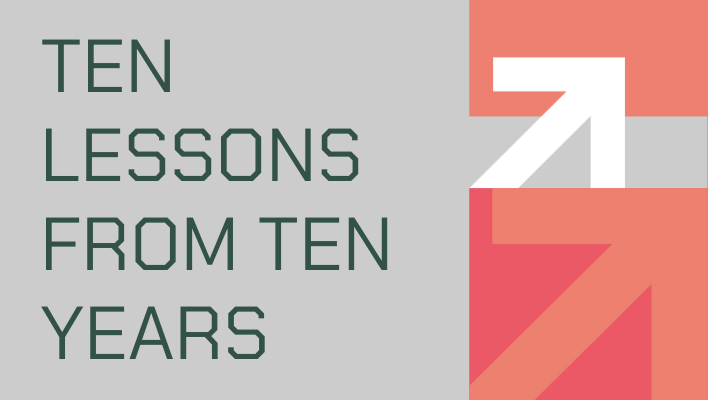 Talk is cheap. Don't wait for others. Leave the ego at the door. Lessons we've learnt from a decade of pioneering tech for good. 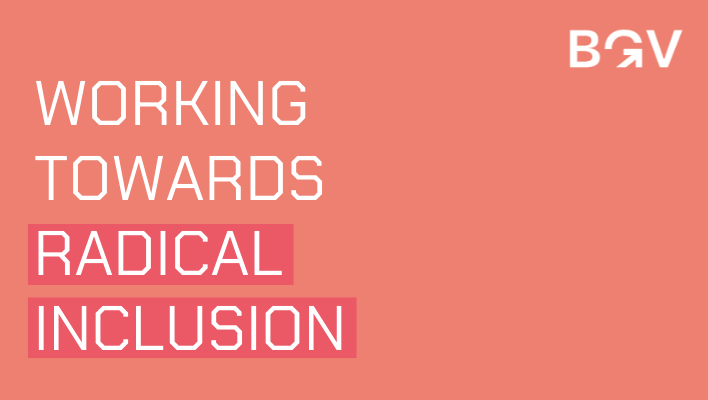 Too often it's the D of Diversity & Inclusion that gets the attention. But inclusion really matters. So too does understanding 'intersectionalities'. Investors committed to investing in diverse founders need to start taking a more nuanced and contextualised approach.