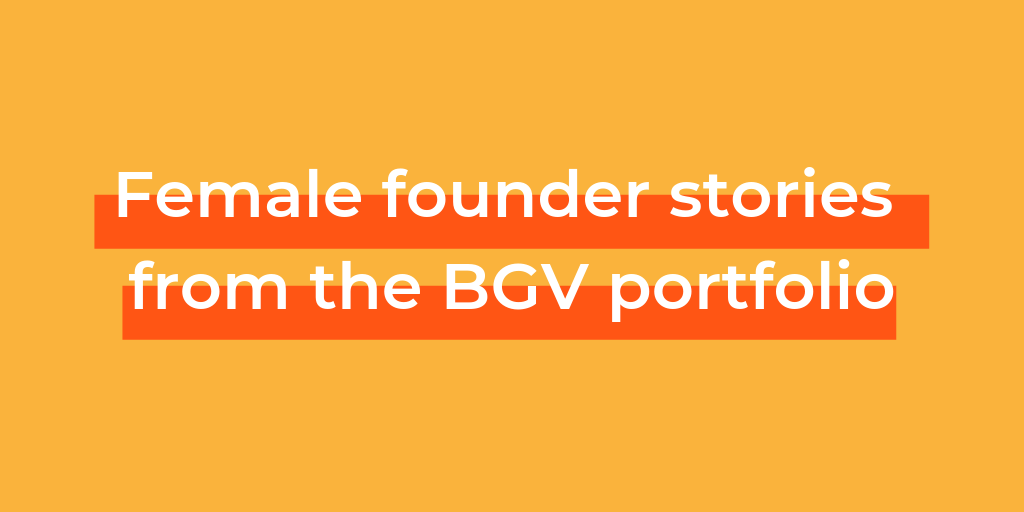 A quote from children’s rights activist Marian Wright Edelman succinctly sums up one of the highest barriers to women entering the tech startup world. Since recent PwC research reports that only 5% of leadership positions in the technology sector are held by women, it’s not a surprise then that 78% of students can’t name a famous female working in technology. We need visible role models. While researching around this subject, I came across a thread on Ada’s List which had an overwhelming consensus that there’s a need to specifically highlight the stories of women in tech with non-tech backgrounds. And so emerged the idea to draw on BGV’s own source of tech for good portfolio ventures to do just this; shining a light on the wonderfully diverse experiences and backgrounds of some of our female founders.Career trajectory can often be traced back to childhood interests. Sadly, from an early age, girls and boys are often encouraged towards different subjects and interests, with gender bias even manifesting in the children themselves - associating particular careers as male or female. As I spoke with Mursal Hedayat, founder of BGV portfolio venture Chatterbox, it was clear she had experienced this first hand. Aged 12 Mursal, along with her class, was taken on a day trip to a digital learning centre. The logic model project they were given, a sort of preamble to code, was supposed to take the whole day to complete. Mursal completed it in one hour. With a highly mathematical / logic oriented brain, this project should have signalled the potential she had to pursue and succeed in a technical career. However no teachers or adults picked up on this potential as something to be noted or nurtured. Of course this example shows just how vital it is to be conscious in looking for and treating talent equally in children. However it also just goes to show that these injustices needn’t be the be all and end all. It is pertinent that despite this experience, Mursal went on to found and run a tech for good startup. It shows that early experiences may shape a career trajectory, but they don’t have to define it. Alternatively, for Nathalie, co-founder of BGV portfolio venture EduKit, support she received as a young adult was instrumental in the direction her career took. During her time at university, she received a place with the Windsor fellowship - an organisation that exists to support BAME young people with potential. She credits this experience as introducing her to the world of corporate business, in which she pursued a highly successful career for 13 years at the likes of Accenture and Apple. It’s also no coincidence when she decided to start her own venture with a social mission that she landed on an idea that mirrored the positive experience of the support she had once benefited from. EduKit, Nathalie’s company, provides digital tools that empower schools to ensure that all students can fulfil their potential.Of course it’s vital to ensure opportunities aren’t missed for girls to develop technical skills or for women to retrain into technical roles; however it is also important to stress that this isn’t the only route to working in the tech startup sector. It could be argued that design thinking and empathy for your users is equally important. It’s becoming increasingly understood that user-centred design is paramount. Interestingly BGV alumni Alice, CPO and co-founder of Piclo - a smart energy software platform, originally learnt about this approach in a completely non-tech focused environment. Having studied product design at Glasgow School of Art, Alice explained how you could do the most amazing piece of work but if you couldn’t prove you’d engaged with the intended user, you’d be failed flat out. Of course, as a designer, this user focused approach soon became innate to Alice. However interestingly, it is only of late that this concept has proliferated the mainstream tech startup scene, with founders having to understand and engage in this way of development. Thanks to a forward thinking lecturer on her course who saw the growing trend for software design, Alice began to steer her focus in that direction, explaining that ‘once you understand the design process, you can apply it to anything.’ As noted, employing empathy in a tech for good startup is key. Alice learnt the importance of this early on in a formal academic setting, but for others this comes from a lived experience. Samiya, BGV alumni and co-founder of Andiamo - a 3D printing orthotics company, is a prime example of this. Samiya’s son Diamo was unfortunately diagnosed with Cerebral Palsy and was quadriplegic; she spent 9 years caring for him before he sadly passed away in 2012. It is crystal clear that the pain and difficulties experienced first-hand is what inspired and drives her to ensure that Andiamo puts their users absolutely front and centre. Her role in the company is Chief Patient Officer. While Samiya talked about how she sometimes struggles with imposter syndrome, lacking the ‘typical’ tech startup founder background, it’s obvious how important her in depth knowledge of the problem is to the venture. Not to be underestimated, it’s her unique lived experience which makes her the expert. It was a real pleasure to speak with Mursal, Nathalie, Alice and Samiya, learning about the journeys and experiences which led to each of their founding of a tech for good startup. We hope that their stories may inspire and demonstrate that actually, there is no common founder background or formula. That in fact your individual experience can be your strongest asset, uniquely understanding a problem to bring about the change needed.